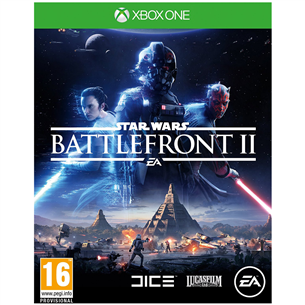 The prequels, original trilogy, and new era meet in an expanded multiplayer experience and galactic-scale space combat. Play iconic heroes that bring distinct abilities to the battlefront - or join the fight in an emotionally-gripping single player story. Your Star Wars hero’s journey has begun.

SINGLE PLAYER
Forge a new path as Iden Versio, commander of Inferno Squad—an Imperial special forces unit equally lethal on the ground and in space. Encounter many of Star Wars' greatest characters in a story of revenge, betrayal, and redemption that spans 30 years.

EXPANDED MULTIPLAYER
Join up to 40 players in massive multiplayer fights in authentic locations across all eras. Revel in deep class-based online gameplay, pilot a wide variety of land and air vehicles, and control iconic characters with distinct abilities that can turn the tide of battle.

CHARACTERS FROM EVERY ERA
Play as—and against—Star Wars' most feared villains and cherished heroes from all three eras, including Kylo Ren, Rey, Darth Maul, Yoda, and many more. Unique, upgradable abilities ensure classic characters bring their distinct powers and personality to the battle.

SPLIT-SCREEN CO-OP
Team up with a friend in two-player offline split-screen play. Earn rewards, customize troopers and heroes, then take your skills and upgrades to the online battleground.