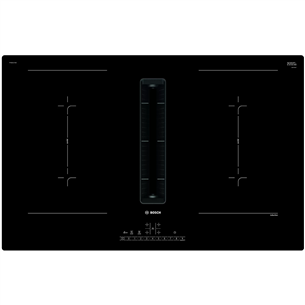 • DirectSelect: Direct, simple selection of the desired cooking zone, power and additional functions
• CombiZone: More flexibility by combining two cooking zones for cooking with even heat distribution, for roasters and the like
• AutoOn function: starts the ventilation module automatically in power level 3
• MoveMode: the automatic setting of cooking levels allows fast boiling on the front and simmering on the rear cooking zone
• PowerBoost: Up to 50% more power for faster heating

Controlling the cooktop made easy
Feature IconThanks to the intuitive control panel, DirectSelect allows you to select the cooking zones and set the specific power level you want - quickly and easily.

It’s a cooktop that also ventilates perfectly
Cooktops with integrated ventilation module allow you more freedom and flexibility in designing and operating in your kitchen. These units combine best technologies of our induction cooktops and cooker hoods in a single appliance. For example thanks to CombiZones you can place even larger cookware on one large zone. And AutoOn that starts the ventilation modules power level when the hob is switched on.

Cooking like a chef
MoveMode makes cooking on the CombiZone considerably more convenient for you. Once it has been activated at the touch of a button, you do not need to additionally adjust the temperatureof the cooktop to keep a pot warm: because, when the MoveMode function is activated, the CombiZone is divided into two areas with preset heat levels. This means you can, for example, cook your meal at level 9 on the front zone and then keep it warm at level 1 on the rear zone.

Boost your cooking
Sometimes you just need a little extra boost when cooking. The improved PowerBoost function in our induction hobs adds even more power to speed up the cooking process. For example, you can now boil 2 litres of water almost 50% faster as you would on conventional glass-ceramic hobs.

Cookings starts much faster
Feature IconThe QuickStart function detects where you have placed the pot and automatically displays the corresponding cooking zone on the control interface. You can get started straight away and select the desired cooking level for your pot without delay.

ReStart stores your control settings
Feature IconIf you turn off the cooktop it saves the last selected setting for a short time. If the cooktop is switched of within a short time again the former settings are still available.

Induction Technology
Induction hobs generate heat only where it is needed – in the base of the pan. What does this mean for you? More safety and more convenience. The lower temperature keeps both big and little hands safe from burning. Not only that, but an induction hob brings two litres of water to a boil twice as fast as a glass-ceramic hob, which also saves a great deal of energy.